The Slambovian Circus of Dreams — A Box of Everything
(Bandcamp Red River RRECD134, 2014, CD) 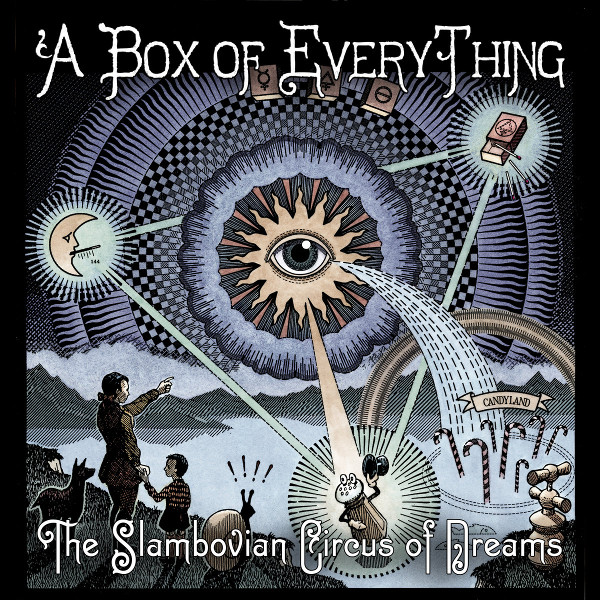 From out of Sleepy Hollow, New York comes the strangely named and genre defying band The Slambovian Circus of Dreams aka Gandalf Murphy and The Slambovian Circus of Dreams aka The Grand Slambovians. Formed in 1998, they play a form of folk rock that some people have described as Hillbilly Pink Floyd or Punk Classical Hillbilly Floyd. They regularly play the major folk music venues in the Northeast and Canada, often to sold out crowds. The high point each year is the Grand Slambovian Hillbilly Pirate Ball, an annual costumed event in October before Halloween. The band's current lineup is Joziah Longo (lead vocals, guitar, harmonica), Sharkey McEwen (lead guitar, backing vocals, mandolin), Tink Lloyd (accordion, cello, flute, piccolo, theremin, backing vocals), and Eric Puente (drums, percussion). A Box of Everything, released in 2014, is their latest album. To give you an idea of the music, it may be best to give a run down of the 14 songs. The 70s inspired West Coast country rock “Rocket” opens the album, reminding me of The Byrds with a bit of Hawkwind’s “Time We Left This World Today.” Track two is the title track, which starts out like an acoustic singer songwriter tune and builds to electric hard rock/progressive tune with some great vocal harmonies. “Tink (I Know It’s You)” follows with harmonica, accordion, and acoustic guitar lending an element of Neil Young’s “Heart of Gold,” which is then augmented by a soaring electric guitar solo. Track 4 changes things up with “The Trans-Slambovian Bipolar Express,” a blues rock/country rock/David Bowie blend that really rocks! With track five, “Sunday in the Rain,” I began to notice the similarity of Joziah’s vocals to Bob Dylan and possibly Leonard Cohen. This excellent gothic western song also brought to my mind Bob Dylan’s Pat Garrett & Billy the Kid soundtrack. Next is “Very Happy Now,” an energetic and melodic song that makes you feel great. Track seven is the Dylanesque “Lost Highway,” waiting only for my boot heels to be wandering. At this point the band contributes the melodic, music hall, steam punk, circus, sing along “A Very Unusual Head” that reminds me of the Dresden Doll’s “Coin-Operated Boy.” This song is followed by the sinister gothic western song “Good Thief” that would have been at home in any Clint Eastwood spaghetti western. Track ten is an upbeat alternative rock song with the odd title “Pushin’ Up Daisies.” Track eleven “Living with God” takes us back to West Coast rock with a bit of Bruce Springsteen thrown in to create a secular praise song. Up to this point the songs have been in the 3 to 5 minute range. Track twelve “Talkin’ to the Buddha” is nearly 10 minutes of repetitive acoustic guitar riff, accordion, more Dylan vocals, electric guitar solos, and a progressive psychedelic mash-up. Track thirteen “Light a Way” is a great progressive folk song. And the album closes with “Alligators,” eight minutes of slow dark rock with the band tossing in the “Hey Jude” chorus in a minor key. What else can I say but that I am glad to have experienced the Slambovian’s musical world? By all means check them out for yourself. You can download a free sampler of their music from their web site.

Gentle Giant - Giant on the Box – The first Gentle Giant DVD is a revelation to fans of the seminal 70s progressive rock act. The DVD has been assembled from the best sources available to create key time-slices into the band’s...  (2005) » Read more