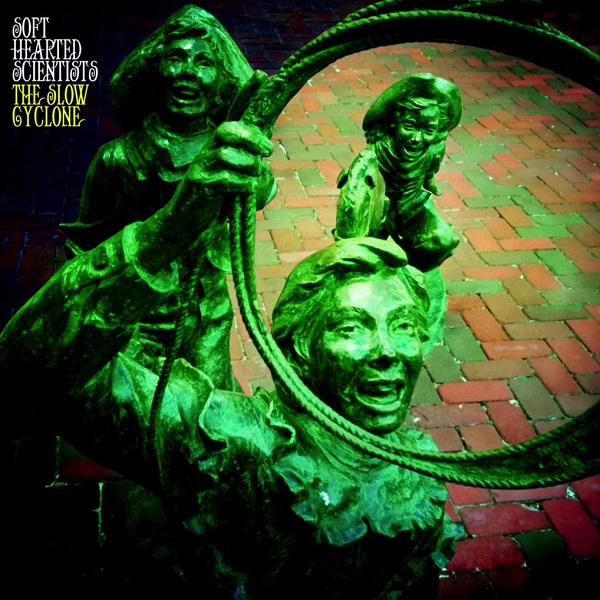 Welsh pop-psych rockers Soft Hearted Scientists return this September with their sixth album The Slow Cyclone. Their approach to this new release is very interesting. Clocking in at 57 minutes, The Slow Cyclone is an ambitious song cycle of 24 tracks (full length songs, instrumentals, and tiny interludes) divided into four groups of six tracks. The Scientists intentionally recorded this disc as “mid fi” in three different home studios, rather than produce a clean and highly polished sound. So there are little real life touches peppered throughout like random coughs, count ins, and other interruptions that contribute to the charm of the music. The tiny interludes are really too short to notice (10 – 20 seconds). So the first track that grabbed my attention was the instrumental “Flying Horses” with its pulsating synths and beautiful surreal sense of a carousel. Some of the songs contain repeated chanting of one or two lines, while others contain pleasant harmonies and catchy melodies. “Drifting Away” is a song that does feel like you are drifting and for some obscure reason it reminded me of Alice in Wonderland. “Hermit Crab” is a cute children’s song that could have been on Donovan’s 1971 album HMS Donovan. Another song of note is “Away” with its acoustic and electric guitars, washes of sound, and vocal harmonies that create a relaxing and floating mood. There are so many different little gems on this disc, it is difficult to call them all out in a review. One song that is entirely different from the rest is “Robots Remember.” Starting with a mechanical analog drum machine it morphs into a calypso – Kraftwerk song of all things! It is only a three minute song, but grows on you to the point where you feel compelled to sing along. And the disc closes with an otherworldly and melancholic song “Before I Was Born.” So like any good scientists, they continue to experiment and test their hypotheses to refine their art.