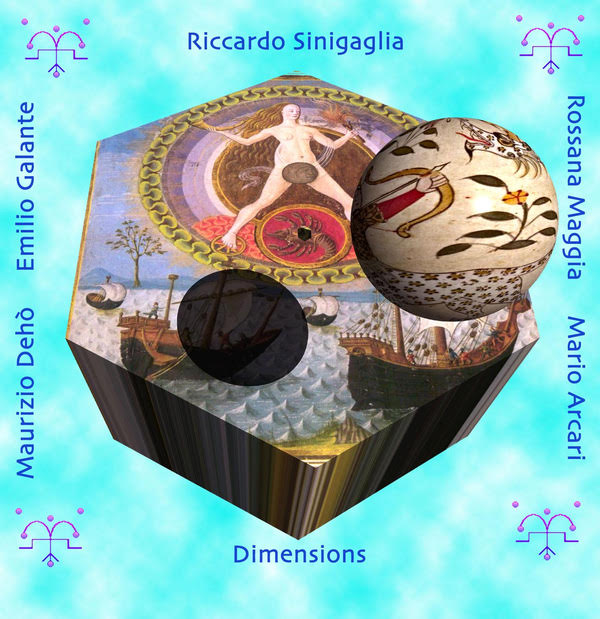 At hand are five compositions in a category somewhere between interesting and magical, originally recorded around 1993, remastered ten years after that, with a couple of the pieces (a purely electronic version of “Evon” and “Quert”) finding a home on a 1992 Auditorium soundtrack disc and a 2002 Margen label sampler respectively, and then finally released together on CD in 2007 on Hi Sound Records, and now reissued again on ADN in 2016. Sinigaglia is primarily known as an electronic musician, although Dimensions is hardly your typical EM set, largely due to all of the pieces being arranged for orchestral instrumentation accompaniment and vocals as well. Joining Sinigaglia are long-time collaborators Maurizio Deho (violin), Mario Arcari (oboe, soprano sax), soprano vocalist Rossana Maggia, and Emilio Galante (flute and bass flute). They don’t all play on every piece, but they do provide the orchestral link that frees the music from being purely electronic entities and also showcases Sinigaglia’s arrangement skills. In addition, samples from several additional musicians are mixed in on percussion, bells, tabla, trombone, viola da gamba, and additional voices. While much of what’s here appears to be strictly composed, there are numerous points where things seem to break out into an improvisational mode, an element that makes this all even more interesting. Of special note is the 26-minute closer “Opal,” comprised of four movements, each section detailed in the album’s liner notes. All taken, these five pieces offer a magical mix of ingredients and influences that cover a wide palette of ideas that succesfully fuse the orchestral and electronic.

Naoki Ishida - Fazing Redust – Although one's initial reaction to this obviously low-budget recording (the hiss throughout is quite noticeable) of seemingly aimless sonic noodling might be rejection, the seven tracks herein do have...  (2008) » Read more