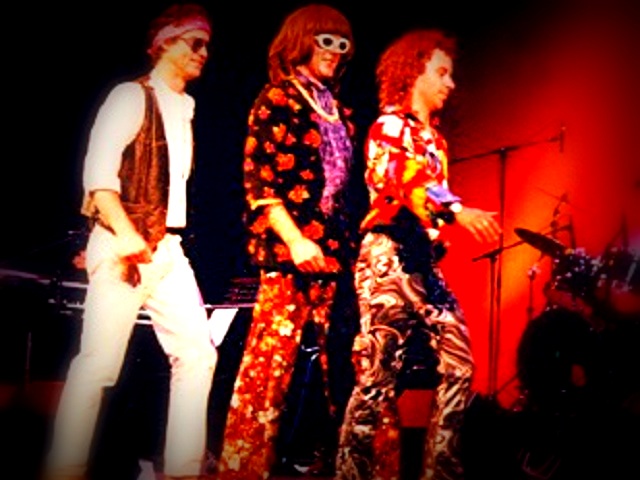 2000 is the year that Progfest moved back to LA, and back under the stewardship of its founders Greg Walker and David Overstreet. The seeds for its return were no doubt planted in '99 when Banco's appearance at the "International Progressive Music Festival (formerly Progfest)" was cancelled after it was already announced. Many had planned on attending and purchased tickets based solely on the Italian legends' playing that weekend. I hope that if another IPMF happens in SF that some better judgement will prevail in that regard, although promoter Shawn Ahearn must be given credit for getting Magma over here for the first time in over 25 years, and giving Bondage Fruit their American debut.

The weekend in LA began with Codice, much improved over their performance in Mexicali a couple years ago (which at that time seemed to be mostly cover tunes). This time the band was tight and confident, working through many of the tunes on their debut Alba y Ocaso, with a solid and substantive symphonic progressive sound. Seems like they got a new singer somewhere along the way too, although the band’s set comprised mainly instrumental numbers, including a solid slab of "Icons," their hour-plus monster that took up nearly the entire second disc of their debut.

The crowd loved them. My only criticism is that the band seemed to be a little too serious and self-conscious at times. Still, a fine beginning to a great weekend of music, but nothing prepared the audience for what was to come next.

Sure, Kenso has about eight live albums out, and all are exceptionally good, but their live performance at Progfest made even me – a diehard fan from the early days, completely reassess the band. Guitarist/bandleader Shimizu came out wearing his dentist's lab coat and guitar slung around his neck and proceeded to turn a hall full of skeptics and newbies into an applauding mass of true converts. Their thick symphonic fusion sound and stellar musicianship appealed to the crowd on a number of levels, and left them awe-struck and standing.

At one of the breaks Shimizu played some curiously familiar prog tunes ("Four Holes in the Ground," "Watcher of the Skies" intro) on two traditional Japanese wind instruments. This was the band's first appearance outside of Japan, and I think the crowd's enthusiastic response surprised them at first, but later it fed their performance to reach even further heights than before, as they worked through a set of material going all the way back to their first album through their very latest. Simply amazing. The crowd wanted an encore, but the house lights came on… damn the rules, Kenso played another song or two anyway! Good for them! Needless to say their latest live album was sold out within about 20 seconds of the end of their set.

Now Transatlantic was the "supergroup" of the weekend.

So super in fact, word was they didn't even bother to rehearse their material in the days leading up to the fest. It showed. Drummer Portnoy flew in from the East Coast a few hours before their set, and left just as quickly. As he does with Spock's Beard, Neal Morse's voice and rock-star posing (watch me play the keyboard with one hand like Tony Kaye) pretty much dominated their set. Stolt got a few nice leads in, and Portnoy's drumming was sharp and precise, but beyond Morse's annoying posturing, there was a certain level of cohesiveness one would expect from a band at this level that was sorely missing from their set.

After five or six tunes I'd had enough and relocated to the lobby where I watched the remainder of their set on the monitors, the way one does with most supergroups when you go see them at the big arenas. They worked though a number of cover tunes including "Magical Mystery Tour" and a "Watcher of the Skies/Firth of Fifth" medley, but the one cover everyone was waiting for – Procol Harum's "In Held Twas I" (from their album) was never to come. The weekend's biggest disappointment.

Saturday's proceedings began with Brazil's Tempus Fugit, a band that sticks pretty close to the cookie cutter traditional proggy-prog style. Lots of lush keyboards, soaring Hackett styled guitars, and a competent rhythm section. The star here is the band's keyboardist, who after a few tunes did a very impressive solo piece – which in fact was far more distinctive than anything he did with the band.

Their set was decent Camel-esque mostly-instrumental melodic prog, but very samey overall. My eyelids were getting heavy by the 45 minute mark so I retired to the lobby. Honestly, there is plenty of talent in this band, they just need to do something more distinctive to set themselves apart from thousands of other bands just like them.

The next band, Mona Lisa, was not a reformed version of the original 70s band, but vocalist Dominique Le Guennec backed up by the much younger 70s oriented band Versailles, which is in fact the same lineup that played on the 1998 Mona Lisa release De l'ombre à la Lumiere, which received much praise in our review (issue 16). I expected no less th

an a great show, with Le Guennec having a long reputation for theatrics and custuming in the old days (see our band overview in issue 12), but little did I expect an entire band full of clowns. These guys were the life of the party, and putting on a damn good musical performance while they were at it. Theatrical symphonic rock of the highest order, their sound draws heavily from the prevailing 70s progressive styles, yet establishes a unique perspective being very French and very vocal as well.

Every song (which drew from new material as well as old) was a show unto itself, with banter and humor – French style, between every song. But if that wasn't enough, they even came out into the audience at one of their breaks with Bordeaux wine and camembert cheese to share with the first few rows of the audience. A circus it was! Another unexpected surprise on a weekend full of them.

I wasn't sure what to expect from Supersister, the Dutch "Canterbury" band that called it a day in 1974, only to reform for this show. I’d heard one of (bandleader/keyboardist) R.J.Stips albums from a half dozen years ago and it was pretty much straight ahead pop - not that interesting, so I had some doubts about what this reunion would be. One thing that gave it a degree of credibility – these were all original members of the band. Well, it only took a few minutes to ease my doubts; this was indeed the real deal, and the band was covering their "classic" period material with surprising energy and precision. Piano, flute, bass, and perhaps the tastiest drummer of the entire weekend! If you don't know them, think Soft Machine in their prime, with flourishes of Caravan's melodic sensibility.

Although their set was kind of cerebral early on (even this writer may have been seen with eyes closed once or twice – not sleeping, mind you, but just meditating on the music's intensity and complexities!), the fun factor picked up midway through, and by the end they were having a blast and had the full attention of the audience, breaking out some of the silly material from their Superstarshine album. This was definitely a reunion that worked.

Finally Italian megastars Banco. A year overdue (see my rant in the first paragraph), but well worth the wait. Unlike Supersister, these guys have been gigging continuously for several years (since the mid-90s) after a lengthy hiatus from their glory days in the 70s and their slide down the pop music track in the early 80s. Anyone who’s heard recent albums like Nudo knew that they were back in finest form, so expectations were high, and the band did not disappoint. Di Giacomo fronted the band with confidence, passion, and magnetism – his voice as strong as it ever was. Keyboardist Vittorio Nocenzi delivered the goods along with several other original members and a few younger kids who’s youthful exuberance (read: posing) sometimes seemed to be at odds with the confidence and savvy displayed by these old pros. The first part of their set was marred by poorly miked drums that had the snare at an unbearably loud level (enough to drive me up to the balcony from my perfect perch in the ninth row), but the problem was soon corrected and the rest of their set went off without a hitch. Songs were pulled from throughout their long career, but the most memorable ones were from those first five or six albums. If you don’t know what Banco sounds like, go buy Darwin or Io Sono Nato Libero and be done with it, you will be converted instantly, as many in the audience were on this all too magical night.

And thus was another year of Progfest written to history. If you didn't go because you didn't know who Kenso or Banco was, or if you only came to see Transatlantic and then bailed, you missed some legendary performances. Attendance was decent, but nowhere near sold-out – which is really nothing new for Progfest. Hopefully Walker, Overstreet, and the others who made this show happen will still lack enough common sense next year to do it again.