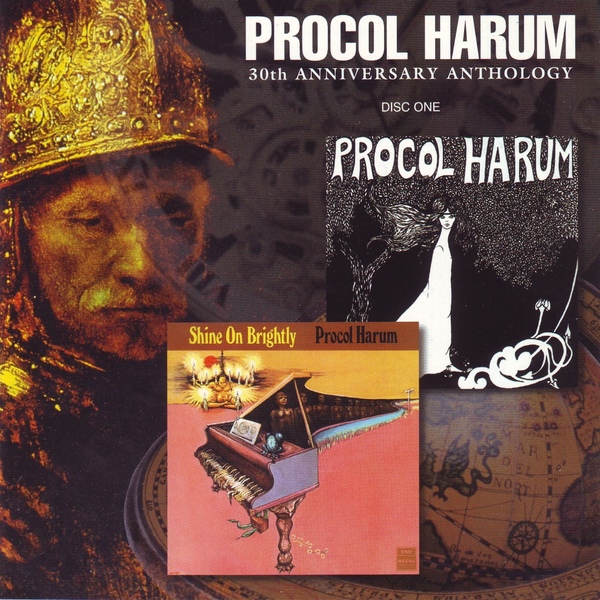 Hard to believe it's been 30 years since the Summer of Love, and also since the lone greatest single in the history of Procol Harum, "A Whiter Shade of Pale," but it's sadly true. To commemorate the event, Westside, an English label I've never heard of, has decided to re-issue the first four albums (with an additional bonus disc) as an early period overview of the band. Albums one and two (Procol Harum and Shine on Brightly) are grouped on disc one minus singles tracks, and A Salty Dog and Home are batched on disc two (in their entirety) and singles and outtakes from 1967-68 are clustered onto disc three. What is interesting to note is the re-mastering process for these discs are slightly warmer than the original masters issues of their third through sixth albums. It's great to hear back-to-back albums of classic early progressive rock. Disc three is a rarities and out-takes disc with a true stereo out-take of the only song most classic rock listeners would love to avoid. Bio information is very good since the band has been sadly forgotten in this country for the body of their studio work. It would also have been more fitting to include Broken Barricades (Robin Trower's high point with the group) in the compilation, but that doesn't diminish the impact of the package set. For those of you initiated, this is a terrific intro to a band who fused the classics, rock, and blues together with lyrics of a sardonic tone. Procol Harum is very much a part of the English rock tradition and deserves a closer look for classics such as "Pilgrim's Progress" and "Whaling Stories."