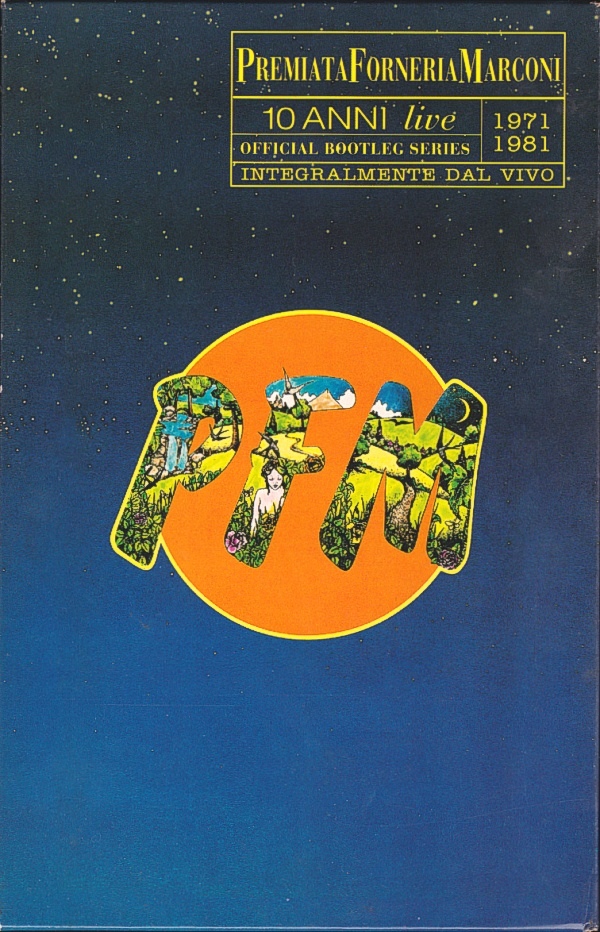 The saga of PFM is one of the most interesting and revealing of all of the "progressive" symphonic rock greats. With PFM you see the birth of the Italian classical rock scene, you see a band whose repertoire wasn't based solely on writing but on improvisation as well, and most importantly you see what made PFM and what broke them eventually. If you ever needed an example of a "prog" band's voluntary sell out and decline, PFM is the classic example of how a band whose music was some of the most timeless could later sink into abysmal self-parody.

Unfortunately, this 4CD official bootleg series leaves out PFM's reign as the Italian king of symphonic rock around late 1972 to early '73 but as you will see there's more to make up for it. With disc 1 (1971-2) you have a set that preceded their epic debut Storia di un Minuto and consisted mostly of covers — King Crimson's "21st Century Schizoid Man" and "Picture of the City," Tull's adaptation of "Bouree" and "My God," and a smattering of jams. Only two tracks from the debut are here and altogether this disc only lends itself to nostalgia.

I suppose PFM's high point was mostly left out due to the lack of reasonable sound quality recordings from the era. If you remember, at least one show was released from this era and the bootleg quality was dreadfully shabby. It's still too bad that there aren't a lot of Italian vocal versions between any of the discs. Anyway you can't complain too much about discs 2 and 3 and although they aren't quite as interesting as when they weren't trying to sing in English, the band instrumentally still was at top form for the next few years. On disc 2, from 1973-4 on tour in the USA (amazing isn't it?), four out of the 12 tracks are solos or jams and on disc 3 (from 75-6) the total is seven of 15. Many of these are excellent, especially on the latter disc where often it's a chance to put a stranglehold on Lanzetti's Gabriel like vocals (what was wrong with the vocals before they hired him?).

Yes, it's painful to see how such a refined and elegant group would go to such ends to Anglicize their sound. As PFM continued into the late 70s, they continued to be the masters of excellent instrumental rock yet occasionally went for the hit single with their new vocalist. Honestly there was a lot of good music made as late as Passpartu when the band reverted back to Italian lyrics, but by this time they had changed their style to a more folkier and direct one. On disc 4, this period of decline, which the set documents to 1981, does have a lot of high points with the Chocolate Kings / Jet Lag album music. By the time of the 80s material PFM were inspirationally somewhere far from the elegant spacey symphonic rock of their first three or four Italian albums.

In summary, you have 3 to 3 1/2 discs of good material that is at least 3/4 great (if that makes any sense). Considering most of it is not really PFM's very best progressiva Italiana its really a surprise how damn good this set is. With a really comprehensive booklet with lots of pictures and a comprehensive biography, this seems to be an intelligently put together set despite some misgivings. But how good could they have been?