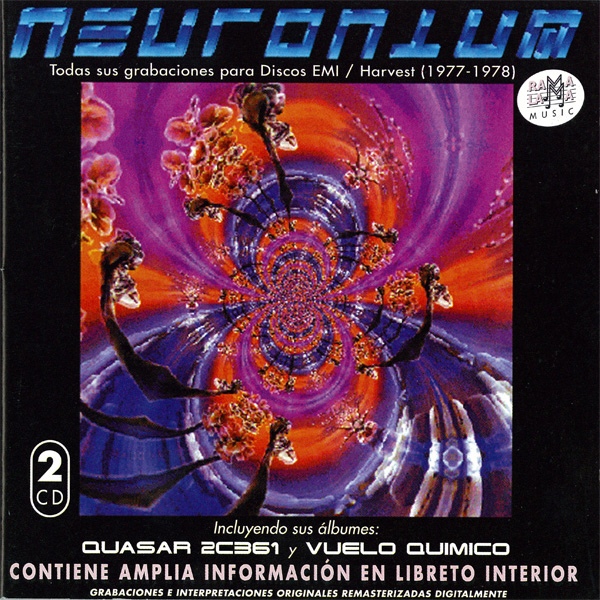 Despite the 1998 publishing date on this set, these reissues have not been generally available (other than through pricey bidding wars on eBay) until now. This brings both the first and second Neuronium releases together in a single 2CD package. Most people know Neuronium as simply being synonymous with Spanish synthesist Michael Huygen, though in the early days Neuronium was a three-piece band also featuring synthesist/guitarist Carlos Guirao and multi-instrumentalist Albert Giménez. On the debut Quasar 2C361 the sound could pretty much be considered a clone of what Tangerine Dream was doing about four years prior, circa Phaedra and Rubycon: dense washes of keyboard synths floating in space with touches of guitars, flute, and percussion, with occasional sequenced sections and samples of natural sounds. Not a bad thing in and of itself, in fact the album is quite good, but that said, it’s not terribly original either.

On the second release, Vuelo Quimico from a year later, the sound – while still as heavily electronic based as the first, features a higher profile role for acoustic guitar, and more importantly vocals, including a guest appearance by Nico, ex of the Velvet Underground, offering some poetry by Edgar Allan Poe. The overall tone of the album is far less derivative than its predecessor, and with its sequenced elements perhaps even leans more in the direction of Klaus Schulze at times. Those interested in a 70s styled vintage electronic sound would do well to check this set out.

Deathwatch Beetle Repairman - Hollow Fishes – Debut albums from obtuse solo acts can be difficult to ascertain on the surface. The first few listens of this disc from the Toronto based artist sound very much like an alternative to some of the...  (1999) » Read more