Music for Dark Gods —
A Profile of Shub-Niggurath 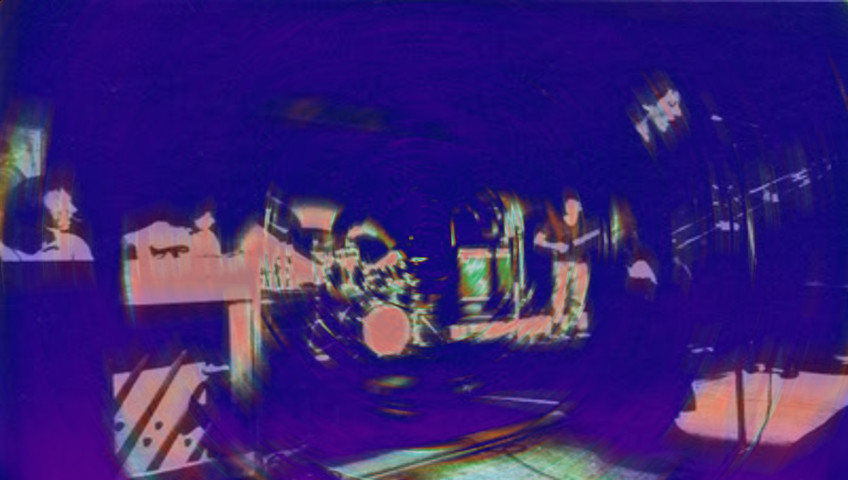 The enigmatic name is, or course, from Lovecraft. The phonetically bizarre world of Lovecraft's mythos has attracted many, many bands to use names of entities and places from its stories and legends. Shub-Niggurath, The Black Goat of the Woods with a Thousand Young, is a dark and terrible alien fertility goddess in the mythos, sometimes depicted as a demonic goat, sometimes as an enormous amorphous mass spawning her "Dark Young" — huge tentacled tree-like hulks with shaggy goats legs and hooves — in an endless orgy of reproduction. The extremity and sinister nature of such imagery suits the music of this band perfectly. If ever there were music for the mythos, this is surely the archetype. 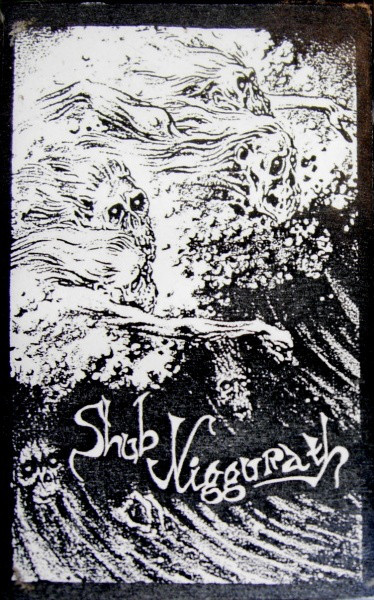 Shub-Niggurath formed in 1983 — six people with the goal of "the most extreme expression of [our] sensibility" and diverse influences from electroacoustic and modern jazz to 17th century Italian and contemporary classical.

Their first untitled tape was released in 1985 and received quite a remarkable reception from the relevant specialist parts of the music press. The intensity of the music, controlled wonderfully as it was, became noted by many and much was expected of their planned debut album. During the wait for this, in 1986 someone with a sense of humour saw fit to include a live version of a track from this tape ("Yog-sothoth") on a compilation called Chant d'Amour. Somewhat ironic given Shub-Niggurath's place as dark fertility goddess in the Lovecraft mythos. 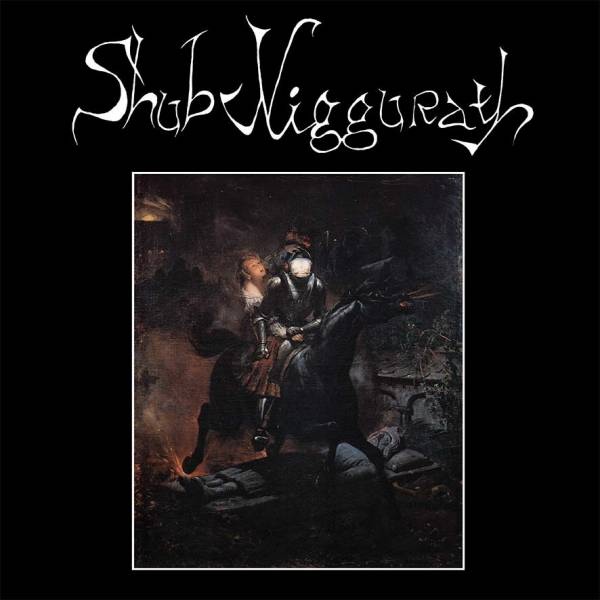 The same line-up recorded the classic Les Morts Vont Vite for the then inchoate Musea label in 1987 and the tone of the reviews escalated considerably; Alan Freeman of Audion magazine prompted to remark at the time that Shub-Niggurath were "one of the most important bands to come out of France in the past eight years." Indeed, as a debut album — indeed as an album of any stage of a career — Les Morts Vonts Vite is quite astounding. Their debut self-confessedly caught them at the peak of their powers at the time. This is quite obvious when listening to it. 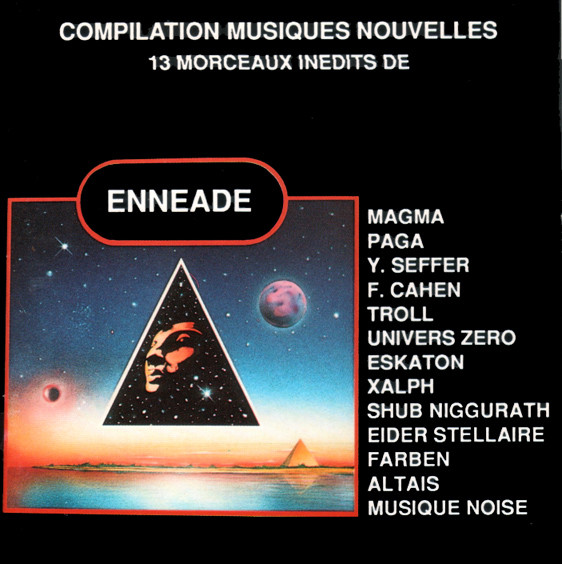 The album apparently sold quite well, particularly overseas, and the band were reportedly happy with Musea's distribution. Later in 1987, Musea issued the well-known Enneade compilation of zeuhl influenced music and tribute to the Magma legacy. Included was the track "J'ai vu naguère en rinture les harpyes ravissant le repas de phinée" by Shub-Niggurath. Apart from fuelling the Magma comparisons by simple association, this demonstrated to many that they were a real force in new music. Since Magma, by this time, had turned to their rather watered-down soul influenced style, Shub-Niggurath stood out and compared very favourably to their supposed mentor. Audion magazine proclaimed Shub-Niggurath's track "brilliant."

After this compilation was released, Franck Couland left the band to move into jazz and Frank Fromy also left. This left a rather gaping hole. Jean-Luc Hervé was forced to take on the guitar left by Fromy not, as he said reflecting on this a few years later, because he was really a guitarist but mainly because the guitar was not an optional instrument for Shub-Niggurath. The heavy concentration on timbre and sonority required textural instruments, or instruments that could be used in a textural manner and Hervé found the guitar to be perfect for this. He once remarked that it was used more as an electric sound source; more like a primitive synthesiser with an intuitive interface. In a telling phrase, an interview in 1990 had him saying he preferred "timbre to notes" and this largely explained his move from keyboards to guitar. It also provides a valuable insight in to Shub-Niggurath's approach to music.

1988 brought another compilation called Dithrambe which was more of a collaboration between Shub-Niggurath and Sleaze Art, a band composed of five bass players. The two tracks here were quite different; part two of the track on the Enneade compilation and another called "L'homme à l'habit gris"; a solo voice performance by Ann Stewart. Lacking a drummer and a guitarist — Hervé had to take over this lacuna — the sound is quite minimal and pared down. The work on this album was later to be thought by the band as having its faults. The departure of two central members was a problem and they came to regard the solo vocal track and the interpretation of the longer ensemble track as untypical of their output. 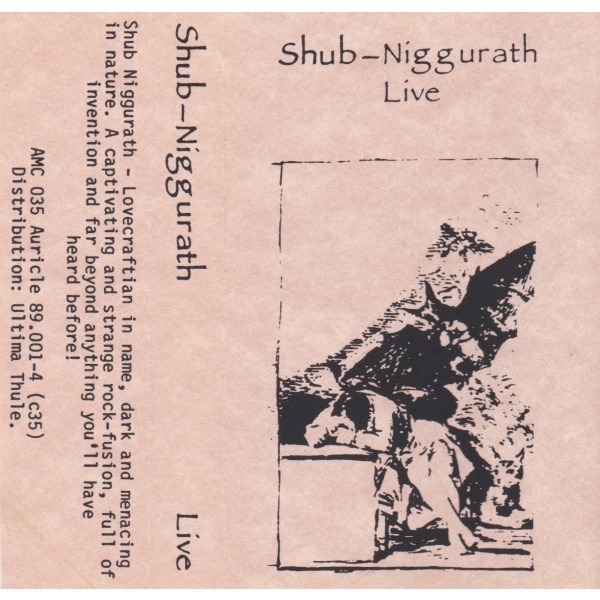 Another track "Delear Prius" on the Douze pour un 2 compilation in 1989 was followed by the live tape release on Auricle the same year with a considerably changed line-up:

Notice also that there had been some significant shuffling of instrumentation implying considerable musical versatility in the musicians. Recorded on Friday 13th, 1989 in Paris, this release demonstrated rather incredible ensemble playing and group intuition. Around this time, Jean-Luc Hervé commented in interview that the "core" of the band consisted of himself, Verdier, Kervinio, and Ballaud with others being drafted in for concerts and session work as necessary. Interviews from this time suggest that Kervinio was never permanently committed. 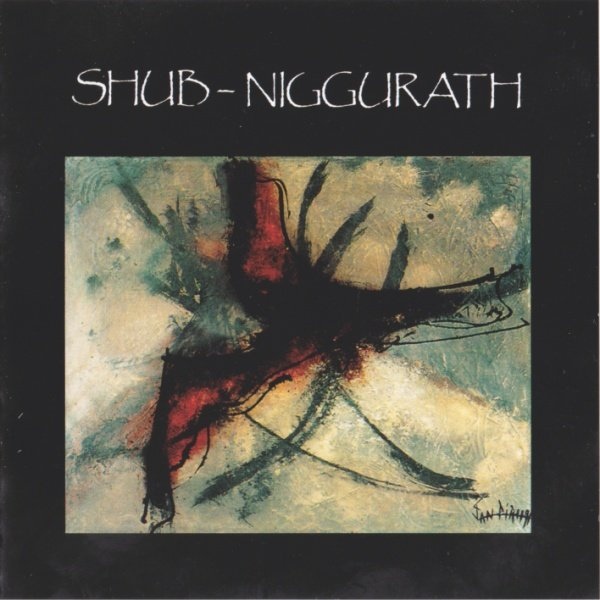 1991 came and, at last, their first CD release, C'étaient de Très Grands Vents, on Musea. The line-up was almost the same with the addition of another percussion player and Jean-Pierre leaving to take up a career as a painter; he contributed the painting for the CD cover.

The CD marked a change to a more electroacoustic style with a more spacious and subtle feel. The undercurrent of intensity remained. Since 1991, the band has recorded "many tapes" -- none released -- and performed as a four-piece consisting of Ballaud, Perraud, Hervé and Verdier. Small tours around the Paris area playing to specialist audiences have fuelled their continuing enthusiasm. In 1995, a rather unpleasant event occurred; Alain Ballaud died of cancer. He was central to the band in many ways and very active in its musical direction; Véronique Verdier stated recently that many things have to change in order for Shub-Niggurath to continue. As a first step, they plan to release a CD of material composed between 1991 and 1995, hoping for a 1997 release. The style of this work is apparently based around improvisation and electroacoustic experiments, following on their last recorded work.

As far as ex-members of the band are concerned, Sylvette Claudet is now a jazz clarinettist, Jean-Pierre Lourdeau paints, Michel Kervinio remains a friend of the band and plays in small jazz bands. Frank Fromy produces some things with Musea and has played with T. Toeplitz of Sleaze Art. He has also gathered together a little society of French musicians and works with them. Of the remaining members, Edward Perraud (the youngest member of the band) remains interested in jazz and classical percussion, electroacoustic music and music theory. Jean-Luc Hervé composes contemporary music for orchestra, soloists and chamber ensemble which is finding significant favour with recognised musicians. Apparently, he writes in the "spectral" style and has studied with Gérard Grisley. Véronique Verdier, after playing with some contemporary bands, has taken up an instrument called the "saqueboute," a quieter ancestor of the trombone. With this instrument she plays 17th century music (mainly Italian) in small bands, dabbling in Monteverdi and Mozart. This is not an instrument to feature in future Shub-Niggurath work as "... in Shub-Niggurath, the power of sound is very important: electric guitars are playing very loud."