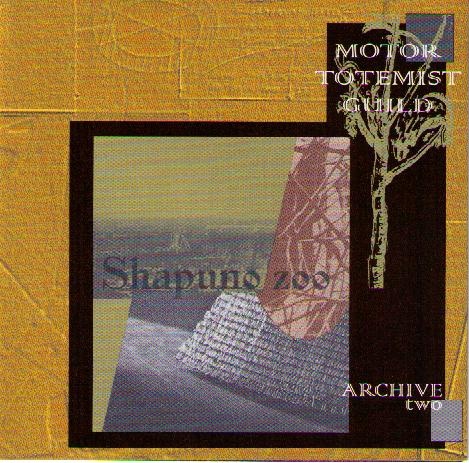 Before the recombinant U Totem ever hit the streets, baton wielder James Grigsby fronted The Motor Totemist Guild (recently reconstituted as a twelve-piece ensemble featuring members of Non Credo, U Totem, and others). It allowed him to explore a plethora of experimental approaches descended from The Residents, Frank Zappa, Stockhausen, and other avant-garde and improvisation luminaries. His first two LPs, Infra-Dig and Contact with Veils have now received digital baptism on Archive One. While the rock-based Infra-Dig welcomed a healthy guest roster, Contact was written specifically for the trio (bass / winds / cello) formed thereafter; chamber-rock that winked at jazz and medieval music, while politely ignoring the rock end. Now, former U Totem sidekick Dave Kerman's overdubbed stick work restores some of the crash-boom-thud-#?%/*! to Contact with Veils, that was always present in MTG's (though drummer-less) live work. Grigsby's quirky embrace of the absurd and farcical prevents these gems from submerging into seriousness, despite their high-falutin inspiration. Somehow though, praise of "America's RIO!" is quick to heap about The 5uu's, while neglecting the equally deserving Guild. Infra-Dig in particular is spirited musical merriment, with personality and character etched into every moment. Should have been heralded a minor classic.

Archive Two covers 3/4 of the third and fourth LP releases, which appeared subsequent to the meeting (though not the official grouping) with flautist Emily Hay, and 5uu's mastermind Dave Kerman. Produced simultaneous to that group's finest moment, Elements, "Shapuno Zoo" is almost U Totem incognito; a return to the group format and giddiness of Infra-Dig, though more mature and self-assuredly rendered by the larger, updated MTG mini-chamber ensemble. Highlight here is definitely "Imperfections" (compare it to The 5uu's version). "Omaggio a Futi", a side-long tape collage composition from the album of almost the same name (and spelling that no one can get right), was MTG's most experimental moment, and may be a bit rough going for beginners. Its song-styled second half has been omitted in favor of the more substantial "Barbie Variations," a quasi-operetta from their obscure 1985 cassette, Klang. Setting aside U Totem's scant live work, which is unfailingly a moving musical experience, I prefer this MTG material to most of U Totem's recorded output. Outré, and yet accessible, it is a liberation from the weighty concepts of U.T. Furthermore primitive recording conditions acted as an inbuilt editing device, corralling these projects into more immediately consumable form. Granted, nostalgia taints my viewpoint due to personal involvement with the "outside music" scene at the time and place of MTG's inception.