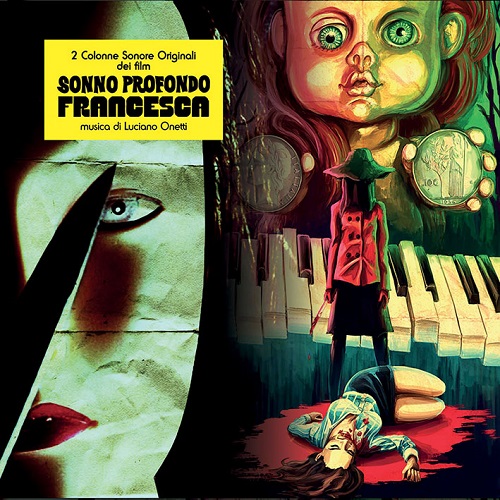 Well that was something totally unexpected. Basing my preconceptions of the album by its artwork — I know, a stupid mistake — I was expecting to hear a horror soundtrack similar to Goblin or Claudio Simonetti, instead what I experienced was 53 minutes of some of the finest avant garde / abstract experimentations the likes of which I have not heard in decades. And every once in a while Onetti throws in some Italian prog rock like “Sonno Profondo,” “Francesca,” and “La Bambola di Francesca.” This album is actually a combined release of movie soundtracks for Sonno Profondo and Francesca. Most of the other 19 tracks are hauntingly eerie abstract sonic poems that probably greatly enhance the movie experience. Scraping strings, clashing pianos, 78RPM record snippets, plinking piano keys, demented music boxes (“Happy Birthday” and “Für Elise”), crying babies, and a child singing “Frère Jacques” all add to the outré mood of the disc. And for the “Finale” of Sonno Profondo the sounds pile up to a climax that reminds me of LIgeti’s “Lux Aeterna” used in Kubrick’s 2001. So check your preconceptions at the door, put on the album, and strap yourself in for a wild ride through a bizarre avant garde soundscape across two horror movie soundtracks.