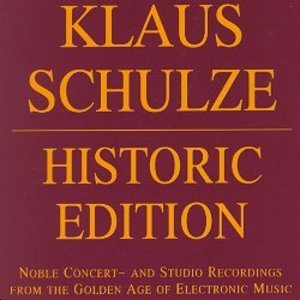 It's getting expensive to be a Klaus Schulze fan these days, especially having this released so soon after the monumental Silver Edition. This new 10 CD set is a retrospective of his more formative years, yet perhaps timely especially considering Schulze's recent escapades into rave music. The Silver Edition's approximately 2 1/2 hours of 70s live material was a precursor to this new 10 CD monster, an absolute dream come true for the fan of Schulze's groundbreaking 70s work. In truth, there's really way too much to cover here, as all the CDs are 70 minutes plus, so I'll try to summarize as best as possible. While all the tracks seem to be ordered as to where they'll fit (the shortest is 9:22, the longest 62:49), it's best to look at the music chronologically.

There are four tracks pre-1971, two of them taken from a tape box called Orgel Studien 68-71 (CD 4 track 2 and 10:2.) These show Teisco organ experimentation (lots of pre-synth reverb tweaking) and are very similar in style to his debut Irrlicht. "Traumraum" (10:1) from 1970 is also similar and floating yet adds glissando guitar. The stylistically odd track out (7:1) is from 1970-71 and is like a cross between early Ash Ra Tempel and Schulze's mid 70s style. Klaus plays all the instruments, the music growing and swelling with great drumming. The only track here firmly from the 1972-74 era is "Electric Love Affair" (4:1) from 1973, an 11-minute track very much in the Timewind vein with lots of EMS Synthi-A noises and tracey synth washes. Also from 1974-5 (10:4) is an experimental and unusual piece with bubbling sequencers and strange wailing synth tones.

There is a ton of live 1975 material here, and as Timewind is my nostalgically favorite Schulze album, I was particularly impressed by practically two CDs worth of 1975 material. The entirety of disc 3 is taken up by the Munich May 1975 concert, a great sounding live show, with two out of three tracks over 30 minutes long. This is Schulze at his most spaciously cosmic, sounding like an evolution from "Wahnfried 1888," or "Bayreuth Return" with lots of delayed synth washes, forever changing and evolving Moog sequences. This is some of the most deep and sonorous music I've heard from Schulze. Track 5:3 (from Leiden 10- 75) is very similar and sounds like an alternate version of "Wahnfried" yet with different timbres and synth effects. Track 8:2 "Forneau Cosmique" is one of the set's most impressive cuts, a long spacial journey back to "Totem" from Picture Music with bubbling sequencers trickling from the background and lots of dynamics growing, swelling, and dissipating. Absolutely brilliant and amazing to think it was performed live. The last track from 1975 is a long all-moog synthesizer piece that reminds me heavily of Phaedra or Rubycon period Tangerine Dream with forceful sequencers carrying it along.

1976 is well documented here with many long tracks showing Schulze's Moondawn phase. Generally there are more percussive sequences and some very spacey phases similar to "Floating" from Moondawn. Tracks 2:2, 2:3, 6:2, and 9:3 (a short soundtrack) are all in this vein, yet with many unusual ideas and dynamics, it would take an amazing amount of space to document the sounds and ideas in all these tracks. 1976 also showed that many of the ideas to be found on the Body Love albums and especially Mirage were in embryonic form, as both 6:1 and 8:1 (over 1 1/2 hours of music between them) show his fascination for tinkling crystal synth tones and amazingly cosmic space outs. The tracks from 1977-1978 show this further evolution and Klaus Mueller (Schulze’s manager) was kind enough to add the St. Michael’s Cathedral, Brussels concert from 10-17-1977 (1:2 and encore 2:1), the former (at least) being an incredible piece of live music that has to be heard to be believed. Tracks 4:3 and 4:4 (the latter a soundtrack for "Barracuda") from 1977-78 are also close to Mirage yet a little darker and experimental.

The biggest attraction yet unfortunately the set’s biggest letdown is the three tracks (5:1, 5:2 and 1:1) from the Leiden, Holland November 1981 show with Manuel Göttsching. The music is closer to the style on Trancefer or the Richard Wahnfried project with monotonous sequences and far too little development. I was hoping for more of Göttsching's guitar work here, but to tell you the truth I don't remember him playing much here and it's hard to detect his presence other than from the EKO rhythm computer. From 1982 is the set's longest piece (7:2), a soundtrack with experimental tendencies that sets it firmly in the Audentity period for Schulze. While the sound isn't quite as friendly as the earlier material, there’s a lot of different phases that keep the music flowing and will be of large interest to Schulze's 80s adherents. The latest material are two tracks that make up the soundtrack Havlandet from 1985 with Rainer Bloss. 1985 wasn't what I'd call a good Schulze vintage, yet the ambient and mellow soundtrack here is quite good and possibly the most dreamy of all the material on here. Thankfully they avoid some of the tendencies that marred albums like the double live from Poland or Drive Inn. If you're a Schulze fan (especially a 70s diehard) then this set is incredibly essential. It shows why Schulze is one of, if not the most, important figure in the evolution of cosmic electronic music.