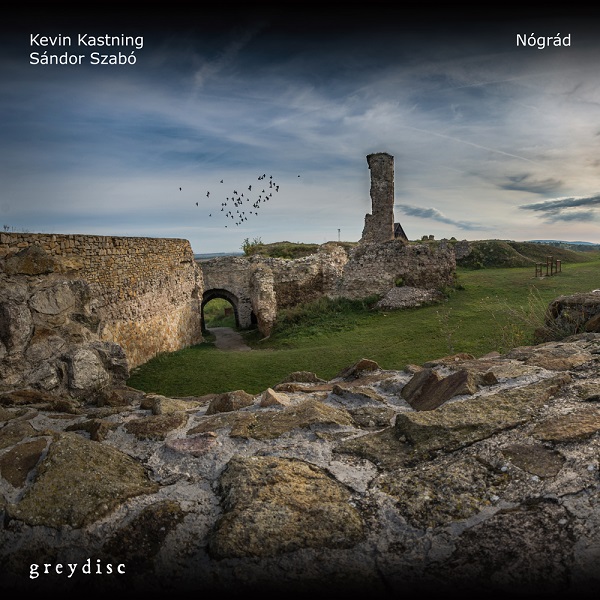 This international duo of guitar explorers offer here a collection of fourteen compositions that they recorded on September 22, 2009 in Nógrád, Hungary. By my count, Nógrád is their twelfth album together (and yes I’m counting a few they did with Balász Major as well), although at the time, circa Parallel Crossings or Parabola, they had only recorded together a couple times previously, and the recordings at hand sat unreleased for many years, yet the result shares the same excellence as anything else they recorded together previously or since. As I have mentioned in numerous reviews over the years, both Kastning and Szábó play an array of custom-made guitars, some with up to 36 strings and two necks, but on this recording Kastning plays only the 12-string baritone and 12-string alto guitars, and Szábó plays only the 16-string classical, providing a semblance of sonic uniformity across all the tracks, yet it's an otherworldly character that is completely unique, informed by classical, jazz and traditional styles, but not really belonging to any of those, instead remaining well on the outside, guided by the sounds of their exotic instruments. Each of the compositions wanders down different paths through a forest of possibilities, rarely repeating and always moving forward to something new, something previously unheard, and yes, these could be fully or partly improvised, but my ears don’t believe so, as the two players approach each piece like methodical, well planned clockwork with all the parts fitting together perfectly. And this descriptive could easily apply to any of those other eleven recordings recorded by the duo before or since. There is plenty here in these fourteen cuts to satisfy the explorative listener looking for something unique.