In Austin's current crop of progressive-leaning bands, Mount Pressmore stands a little closer to the melodic indie-rock side than some, but their music is subtle and complex in small ways, reflecting the vision of leader, keyboardist, vocalist, and chief composer Thomas Shaw. I conducted an email interview with him, touching on the band's history and future, and what's so special about the Rhodes electric piano. 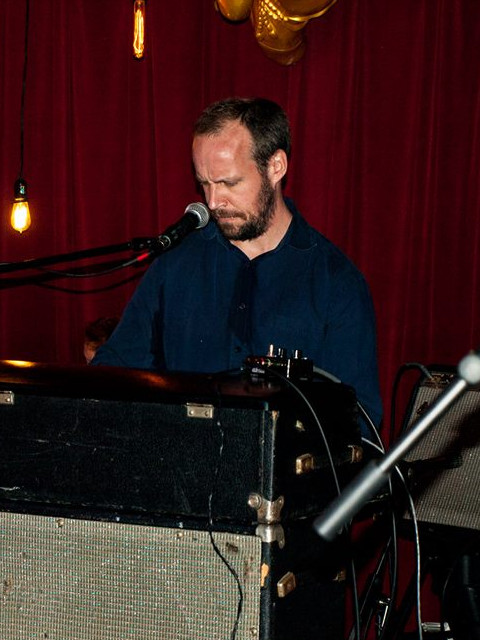 I grew up in a musical family; my mother sang and played piano, and my father was the conductor of the Atlanta Symphony Orchestra and Chorus. So music’s always been with me - my mother used to tell me that she could feel me kick time in the womb. I grew up studying piano and hearing a lot of classical music. It wasn’t really until my early adolescence that I began to explore jazz and rock. Within that realm of contemporary music, the first three artists I remember actively seeking out were Oscar Peterson, B.B. King, and Led Zeppelin.

As a kid, I took piano lessons with Marilyn Walthall, who was then the principal accompanist of the Atlanta Symphony. I also studied trumpet for a number of years with her husband Joe, who was the First Trumpet chair for the orchestra, and I learned drum set with Bill Wilder, who was the principal percussionist. The orchestra was, and remains, a kind of extended family. Later I undertook a program in Piano Performance at a school in New York City called The Collective, and I worked there for a number of years as an accompanist and instructor.

Tell me about your musical history prior to Mount Pressmore.

In addition to my work at the Collective, I played in a number of different bands, and also wrote music for theater and film. I continue to do scoring work, mainly at present for commercial video projects. Of the bands I performed in while in New York, I have two favorites: one was a sixteen-piece funk band which I led and wrote arrangements for called the United Funk Orchestra; the other was a Led Zeppelin tribute band called Led Blimpie. Both were/are great bands with phenomenal players. Led Blimpie still performs in New York. 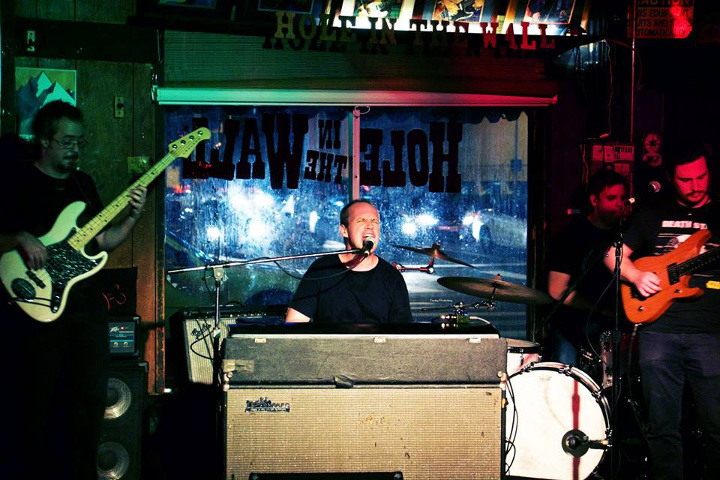 How did Mount Pressmore come together?

I had met our founding drummer, Kris Studebaker, while he was a student at the Collective. Kris moved down to Austin in 2008, and I moved down to Austin in 2011 and reconnected with him. Kris had been playing with Alexei Sefchick, our bassist, at the Austin Samba School, while teaching drums at a local music store. One of my first times playing with Alex was for a drumming class Kris was leading. Alex found our first guitarist, Danny Anderson, through the Berklee alumni network; we then came together as a quartet, and I began writing music for the group.

The band’s music is credited to you as composer. Do you present finalized pieces to the band, or do things develop in the band setting?

I generally present finalized pieces to the band, having found that process to be the most efficient means of developing material, given that our most precious commodity is shared time. Everyone’s time is valuable, and we’re all currently obliged to undertake other efforts to make a living, so I feel like the way I can show the most respect to this group, who have come together of their own volition and musical passion, is to bring an idea to as complete and detailed a shape as possible before asking each individual to then begin the work of development. Collaboration is one of the aspects of music I love most, and my writing is continually influenced by an evolving understanding of each player’s voice, but I think the presentation of musical structures, within this group of individuals, contributes both to running effective weekly rehearsals and to a shared sense of steady progress within the band. 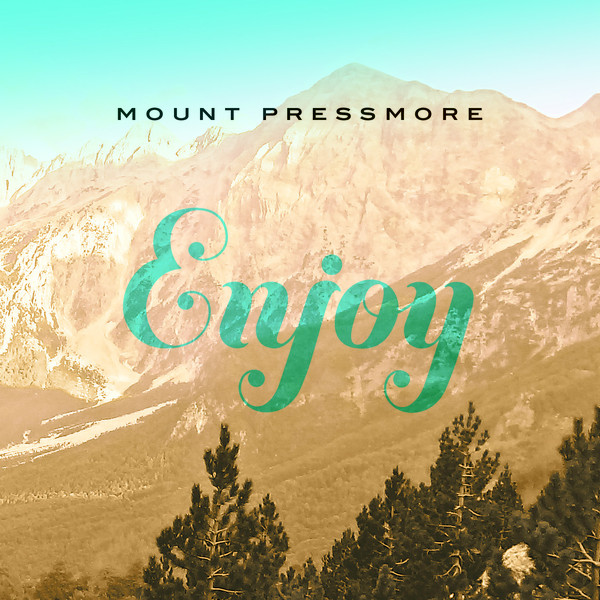 What do you see as the elements that make Mount Pressmore’s sound? It seems you use a Rhodes electric piano almost exclusively. Is that a deliberate choice that you see as integral to the band’s identity, or has it just worked out that way?

Anyone who has lugged a Rhodes around to gigs will assure you that there’s a damn good reason for it. For me, there was just no other keyboard instrument that could convey a rock aesthetic as effectively as the Rhodes. Digital models can’t convey the dynamic grit, or the overtones you achieve (especially with the pedal depressed); the Wurlitzer’s a great solo instrument but lacks the sonic body of a Rhodes for chordal work; and the Hammond B3 is just a completely different sonic choice, as well as being an enormously heavy and complex instrument that truly demands its own technique. I had first heard the Rhodes in a number of jazz and funk applications, and I wanted to develop a sound in which the Rhodes effectively took the role of the rhythm guitar within a rock-oriented context.

The song arrangements feature intricate interactions between the guitar and the Rhodes, often with neither of them playing chords. What is your inspiration for using this kind of backing?

I'm inspired by a continually evolving understanding of each instrument's function within the band, and by the interplay between African and European musical traditions that shapes American music. Because I grew up around a lot of choral music, I'm predisposed to consider each instrument as its own (human) voice, including drums. Sometimes I'll write two synchronous melodic lines between bass and guitar that, when voiced together, create a chordal riff for part of a song; other times I might establish an idea that's played first by Rhodes, and then developed further, or harmonized, by the guitar. It's all part of an effort to compose a musical framework in which each voice has an intentional rhythmic and harmonic relationship with every other voice, and all combine in service of the song as a whole.

Do you have any particular influences with your playing on the Rhodes?

What changes are there musically between the first and second albums?

After our first album, our founding guitarist had to step down due to a hand injury. It took a long time for us to find his replacement, but we ultimately did so in Tom Ray, our current guitarist whose work you hear on our second album. I think our sound is tighter, more focussed, and more guitar-forward on the new record, The Masked Battle. Some of this change is the result of Tom’s unique character and sound, and the energy he brings to the group; some of it is due to the accumulated history and experience of the rhythm section. The Masked Battle also represents our second recorded effort with Austin producer/engineer James Stevens, and our collaborative dialogue with him has deepened significantly from one record to the next.

What are some of the highlights of Mount Pressmore’s journey so far?

One of the most rewarding things in this age of interconnectedness is to hear from a listener, maybe halfway around the world, who’s discovering the band for the first time, and who’s really into the sound. It has also felt really good for us to connect, particularly within the past year, with a group of local musicians and listeners who are committed to new and experimental music. We recently played a festival in Austin called VoyagerFest, and the organizers of that festival have a passion for boundary-pushing and genre-bending when it comes to musical styles. Theirs is an incredibly supportive point of view, and I think it’s essential to the inception and growth of a thriving local music scene, as well as to the development of new artists and new forms of music. 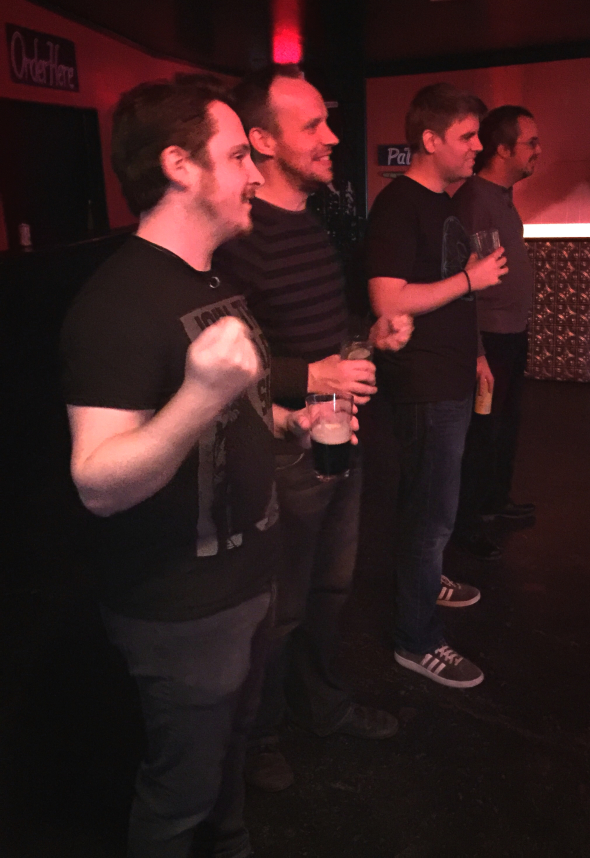 What are the band’s future plans? What’s the situation with the second album?

We aim to record two albums in the coming year - one, a collection of lyric-oriented pop songs consistent in style with our first two albums, and another, a record of short, funky instrumental pieces. We’ll continue to play local and regional shows. Our second, forthcoming album is in review at a couple of record labels. One way or another, we’ll release it, and plan a tour in support of it, most likely in the spring of 2017.

What are some of your musical activities outside MP? How about the other band members?

As I mentioned earlier, I’m currently doing a lot of commercial video scoring. All of us have either taught music or are currently teaching. And though we’ve all gone through periods where we’ve played in multiple bands, you might say that at this moment, we’re pretty band-monogamous with Mount Pressmore.

How does a band like Mount Pressmore survive in today’s music world? How do you deal with the business as opposed to the creative aspect of making music?

I think the first step in survival, paradoxically, is taking business out of the equation. We’ve all found ways of meeting our practical needs, from day to day; this musical work concerns the affirmation and maintenance of our individual and shared human spirit, and we give to it because we have made space in our lives to do so, because this activity is essential to our well-being, regardless of outcome. From this perspective, survival of the group is about listening to one another. Whether we’re playing to an audience or rehearsing as a quartet, our aim is to connect on an emotional, intellectual, and spiritual level. If we can do that for ourselves and for others, there may be no greater return that music can offer.

Kit Watkins - Kinetic Vapors – Perhaps because of his classical training or his background in the rock world, Kit Watkins' music tends to have a real sense of purpose and direction when approached from the progressive rock...  (1994) » Read more

Out of Focus - Rat Roads – This is my first encounter with this classic German group, so knowing that the tracks are outtakes from their 1972 sessions for the album Four Letter Monday Afternoon didn’t tell me much. As the...  (2003) » Read more