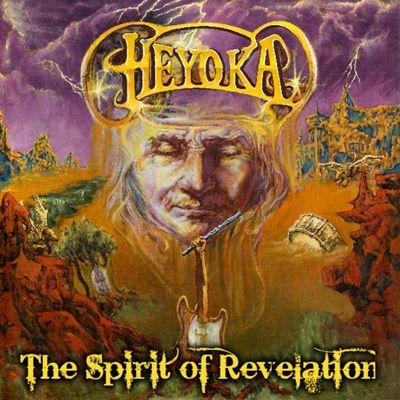 Not so long ago in a land called Texas there was a progressive rock band with a strong local following that for whatever reason remained unsigned during all their years together, which was most of the 70s into the early 80s. Although the members of Heyoka changed over the years, lead singer and flutist Michael Grothues and drummer Gerardo Ramirez were there from beginning to end, and the songs on this CD/2LP set were recorded by a consistent five-piece lineup in the latter half of the 1970s that included Dito Garcia (guitars, keys, backing vocals), David Alcocer (guitars, backing vocals), and Pat Hood (bass, backing vocals). One might surmise, from the number of voices in the band, that there are some strong vocal harmonies among many of the tracks here, and many of the lyrics show influence of Native American mysticism, and opening track “Thunderdreamer” even includes a chant and dance of obvious American Indian origin surrounded by gripping progressive rock of the highest order. With two guitarists in the lineup, there are many opportunities for passages featuring side-by-side acoustic and electric. With the singer doubling on flute, some will find comparisons to Jethro Tull, but with the strong harmonies, aggressive guitars and diverse compositions, the most relevant references might be classic Kansas, pre-pop Styx, and early James Gang, with a percussive power that occasionally recalls Santana’s more rock element. One of the most impressive things about The Spirit of Revelation is that the sound and mastering from track to track is very consistent, even though the sources of the recordings span a period of several years. To avoid any confusion, about ten years ago there was a limited release titled The Lost Heyoka Recordings, which was pretty much a raw representation of all the band’s demos from this period. Those tracks are included here on this latest release in remastered form along with a few more. All taken, this is an impressive release by a band that deserved far greater recognition in their day.