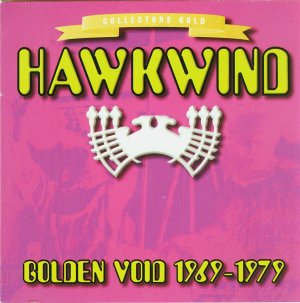 Hey look, it's another Hawkwind compilation! I hope they got paid for this one. For your information, the band is as unhappy as the fans about the crop of Hawkwind reissue albums that pop up, always with the same damn songs. Fear not! Golden Void 1969-1979 is a collection of EPs from the late 70s of material from the Flicknife label (most unreleased to CD as yet). You get the Hawkwind Zoo EP featuring two tracks from 1969, the folksy "Hurry on Sundown," and a taste of things to come with "Sweet Mistress of Pain." The Sonic Assassins EP features tracks from the 1977 tour of the same name. "Over the Top" and "Freefall" are excellent Calvert spoken-word songs. It's a nice little glimpse of the band live. The Earth Ritual Preview EP from 1983 brought Lemmy back into the fold for "Night of the Hawks." Also on this set is the great 12" version of "Valium 10" and the hard-to-find B-side "Time of... (The Hawklords)." Also appearing is a nice instrumental version of "Kings of Speed" which I had never heard before, and awesome live versions of "Spirit of the Age" and "Robot" from the Friends and Relations albums. Official Hawkwind chronicler Brian Tawn provides the liner notes, giving this nice gold-disc collection a stamp of legitimacy, as does the 30-minute Dave Brock interview appearing at the end of disc two. I would highly recommend this to Hawkfans, but I don't think this would be the place to start for the unfamiliar.