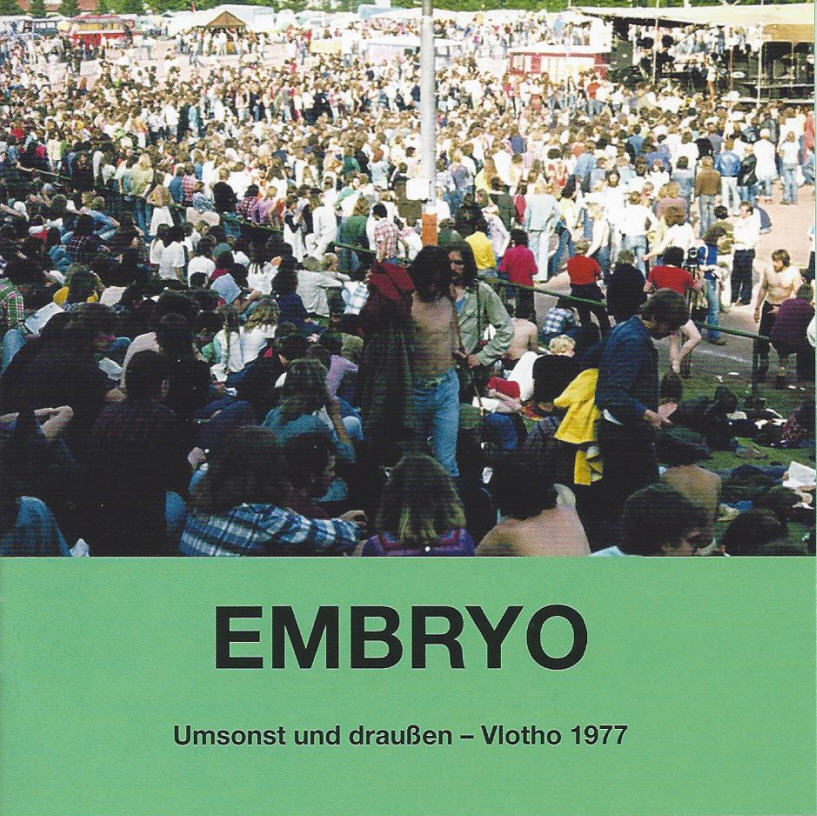 Following the Embryo Live album, recorded in February 1976, but not released until 1977, a lot of changes were in store for the band. Both woodwind player Charlie Mariano and singer/percussionist Maria Archer would exit the band, and would not be replaced directly. Instead, a succession of drummers would end up with Butze Fischer (from Missus Beastly) being added to the lineup, freeing up Christian Burchard to concentrate on vibraphone, with the vocals being handled by Burchard and longtime guitarist Roman Bunka. In addition, keyboard player Dieter Miekautsch was replaced by Michael Wehmeyer. As might be expected, all these changes made a big difference in the band’s sound, which was reflected in the next studio album Apo-Calypso, recorded only one month prior to the live set at hand. The Vlotho festival was at this point an annual open air event organized by the artists on the independent April label (soon to become Schneeball) and their allies, and this one in the first days of July 1977 was the third year running. The live set opens with a near-thirteen minute “Feeling Song,” which is derived from the seven minute studio track “Endless Feelings” on Apo-Calypso, then moves on to “Intro Idea” and “Prisoners,” a version of which was offered as a 1978 live bonus track (“Prisioneri Politici”) on the Disconforme CD edition of that disc. The only other track from that studio album here is a much shortened version of the amazing “Getalongwithasong,” though its abbreviated length does not take away from its effectiveness, with Burchard and Bunka now sharing the vocals. The eleven minute set closer is “Make It Easy,” with a powerful percussive groove guiding it along with some funky bottom end from bassist Uve Müllrich and a killer drum solo from Fischer that fades at the end of the track (the tape probably ran out...). All taken, Umsonst und Draußen – Vlotho 1977 is a testimony to what Embryo sounded like in mid-1977.