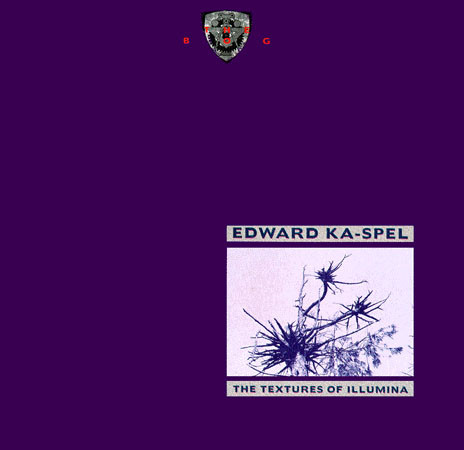 The Textures of Illumina is the latest solo effort by Edward Ka-Spel, the driving force behind the Legendary Pink Dots. On this vinyl-only release, Edward indulges himself in musical experimentation. "The Boomerang Effect" and "The Train to Never" contain typical nihilistic Ka-Spel poetry while "Right On, Food" and "Icing" are extended Nurse With Wound type experiments in musique concrète, loops, samples, and noise. "The Boomerang Effect" has minimal instrumentation with an ambient atmosphere at the end. "Right On, Food" commences with a Ka-Spel signature sequence and evolves into a binge of processed voices and electronics. "The Train to Never" begins with Edward whispering and is the closest on this EP to a Legendary Pink Dots song. "Icing" closes out side two with what appears to be heavily processed sounds from the Ka-Spel household combined with other loops and effects. This release may not appeal to those unfamiliar with Edward’s experimental side, but it is a must for the diehard collector. You even get to hear Edward and Elke’s son Calyxx on "Icing" as well as see a photo of the proud father and son on the liner notes. Though not one of Edward’s better releases, it is refreshing to see an artist continue to try new musical directions and not be constrained by the demands of his fans.