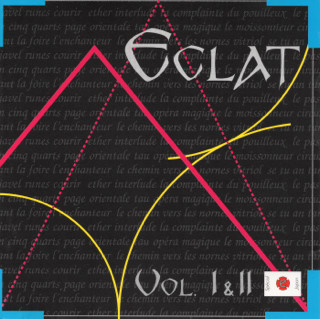 Eclat is a French five-piece whose style lies somewhere between the symphonic stylings pioneered by bands like Ange and Mona Lisa and the folk-directed tendencies of bands like Minimum Vital. There are also touches of neo-prog, jazz-pop, and other diverse influences. This release combines their first two releases, Eclat de Vers from '91 (originally on MSI), and Eclat II from '92 (originally on Musea), now both out of print. The main movers within the band are guitarist Alain Chiarazzo, who is responsible for all the compositions, and vocalist / lyricist Denis Carnevali, who sings only on the earlier album, but wrote all the lyrics for both. Chiarazzo's guitars are comfortable within a number of different styles, from laid-back acoustic oriented fills to buzzing electrified runs, yet it's most noticeable when delivering those blistering leads that punctuate some of the album's best moments. The keyboards and superb rhythm section play an equally important role in Eclat's overall sound, and deserve credit for the band's innovative arrangements. Vocals are in French, and delivered in such a way as not to overpower Eclat's instrumental might. While every song on the first album features vocals, a full half of the tunes on the second are instrumentals, allowing more room for the band to stretch out. Vocalist Christian Décamps (of Ange) guests on the disc's final track "Circus." It might also be mentioned that the second album is where they move into their more folk oriented rock directions, and is clearly the stronger of the two releases. In all, this is an excellent band who seems to be getting better with each new release, and will hopefully be releasing a third album soon. While waiting, be sure and check out these two earlier albums.