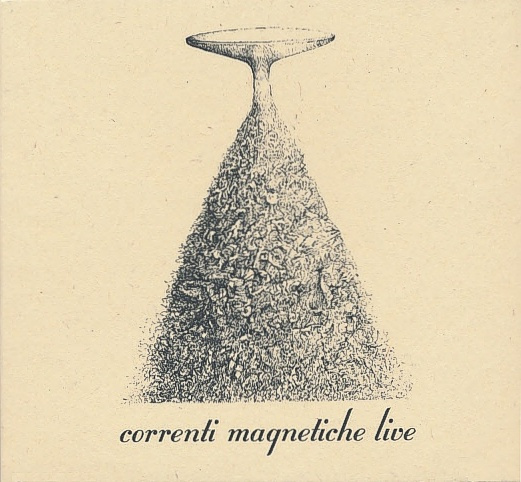 Correnti Magnetiche was a multimedia improvisational group featuring Riccardo Sinigaglia on keyboards, Maurizio Dehò and Erika Hadju on violins, Gabin Dabiré playing sanza, balafon, mallets, percussion and voice, Tommaso Leddi on violin & horn (although not featured on this recording), soprano voice Rosanna Maggia, and group co-founder Mario Canali painting on a computerized graphic tablet with a big screen projection following the music. The group gave numerous performances from 1985 through 1996, but only left three recordings, their 1989 self-titled LP, a VHS tape released in 1991, and now so many years later, this live CD recorded in 1989. Although their music is (or at least seems to be) completely improvised, the group is well rehearsed and doesn’t spend a lot of time wandering around seeking a direction, they already seem to know precisely where they are going, with a lot of interesting angles, turns and twists to keep things interesting as they go. Dabiré’s vocalizations involve lyrics, whereas Maggia’s are completely improvised; the combination of strings, voices, balofon and electronic sounds is completely unique, though throughout the four long tracks one might hear some strange echoes of familiarity, like an inspired cooperative between Aktuala, Cloud Chamber and Opus Avantra somewhere in a mystical place in central Africa. Their music is brilliant, soothing and gentle, as it pulls and pushes in many directions, like eddys in a fast flowing river. One can only hope that more recordings of the group turn up and get a proper release like this one.