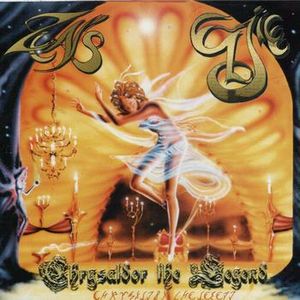 The packaging of this release is a tad confusing, and the title may well be Chrysaldor The Legend, with the musicians being named Zen’s and El Jice. Whatever. This is a release on Musea’s electronic sub-label, based around one of the goofier sci-fi liner note concepts I’ve seen lately (it seems like with every issue of this magazine there’s a new one that outdoes the last…). Luckily the album is pretty well entirely instrumental with the exception of occasional recited sections which are generally unintelligible Manglish (mangled English). The music consists predominantly of somnolent pseudo-ambient textures, which occasionally work their way into melodic, minor-key led, beat-driven, unchallenging ear candy. Think Jean-Michel Jarre crossed with Kitaro and one has a pretty good idea of what to expect. Usually when one encounters an album of digital timbres from Belgium it’s a warning sign of unspectacular neo-prog, so in this case I suppose it’s a revelation to get unspectacular background music instead. Recommended to e-music fans who like to play it safe. Real safe.