Bunnies — Transportation to Mind Transformation and Devoted to the Process of Action
(RAIG R105, 2018, CD / DL) 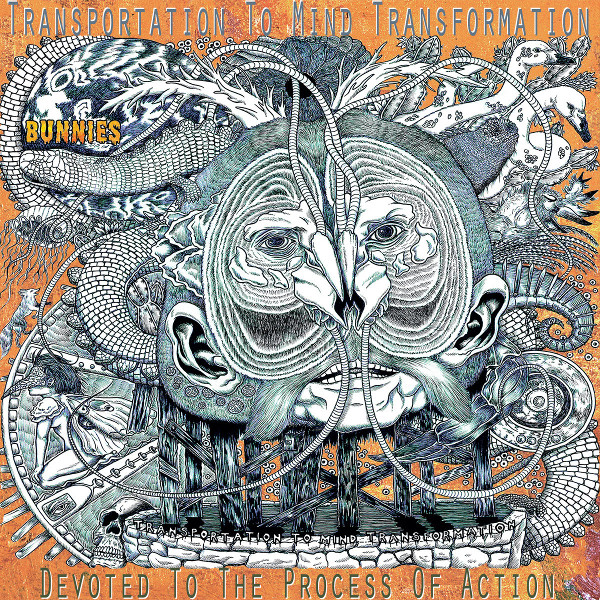 I’ve lost track of how many times I’ve listened to this album, and I still have trouble getting a hold on what it’s about. To be clear, I regard this as a good thing — music that takes time to grasp is music that’s likely to stand the test of time, whereas music that is easily comprehensible of first listen will probably fade from memory. Bunnies is a Massachusetts band, and this release on RAIG brings together two albums that they released independently on vinyl. Devoted to the Process of Action came out in 2013 and Transportation to Mind Transformation dates from 2018, though they are sequenced in reverse order. I’ll cover them in chronological order, because I’m crazy that way. Devoted features two side-long tracks, each of which evolves through a variety of sections and moods. At times, I’m reminded of Cardiacs, though Bunnies' music is much looser, with an edgy feeling that makes you think their songs could go off the rails at any point. Guitar, keyboards, bass, and drums sometimes seem to be going in different directions, though it all holds together in a strange way. Cheer-Accident also comes to mind, more for their earlier albums than the more recent releases. There is never a shortage of energy, and the lyrics often speed by so quickly it’s near-impossible to make them out, though they certainly sound like they have philosophical weight. Transportation maintains a similar style, though the group has honed it to a tighter presentation, with less of the ragged edge of Devoted, and on the whole I’d say it’s the superior effort by a slight margin. Bunnies presents an intriguing combination of art-punk, progressive rock, and psychedelia that is different from any band I’ve heard before, truly in a category of their own.