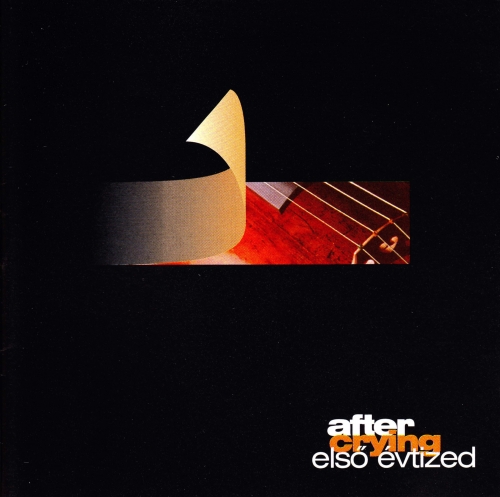 After Crying is a Hungarian band with at least five CDs on the market plus this double CD, which comprises a compilation and a live disc. Surprisingly enough, not much is known about After Crying, but considering the high quality of their music, this may very well change. First of all, the group is about chamber music, the core of the band being cello, piano, and flute, to which various instruments are added, such as oboe, bassoon, guitar, bass, violin, and so on. Many of the musicians have formal classical training, some at renowned Hungarian institutes. This said, and still in the attempt of describing their music, it must be added that the band is known to Hungarian concert-goers to feature none other than AC themselves as opening act, playing note-for-note renditions of King Crimson pieces such as "21st Century Schizoid Man" and “Islands,” as well as Beatles songs. In fact, this precise exploration of Crimson’s pieces, of any others, gives to After Crying’s own material a strong grounding.

A great deal of compositional maturity, shown in the subtle silences between the notes and the development of ideas and themes, decorates the studio offerings of the compilation disc. This disc becomes an excellent entry point into After Crying’s musical world. Excellent playing from the two founding members Vedres Csaba on piano and Pejtsik Péter on cello, with just a little touch of drums here and there. But, even without drums, this music has a lot of groove and intensity, shown in all its eloquence on the second disc of the set, the concert disc from 1991, which is just about all taken from the same evening (apart from the opening piece and the closing piece, “21’s Century Shiseido Man”).The concert includes an incredible and thorough performance by Csaba on piano, and a more than excellent participation by Péter on cello, to which more than nine other musicians add their skills, from a hot bassoon solo to a jazzy trombone solo. Largely instrumental, there are also vocals, sung in Hungarian by Csaba and Péter, with female vocals here and there. This live disc alone should be included in any musician's collection for its incredible performance and spirit, a truly enjoyable compilation disc and you’re off for a musical feast that will stand the test of time due to the music’s inherent ability to express feelings in such a great musical way. If you also want to boogie along, just listen to the “Homage a Frank Zap” on the live disc and you’ll be seriously wondering why drums are needed at all! After Crying’s Első Évtized comes highly recommended to anyone with a leaning on chamber music that also grooves, and to any prog amateur at large. A very good example of excellent music of the 90s.