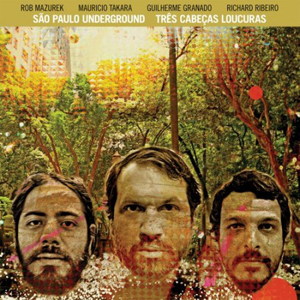 Here's another Cuneiform release that defies description. Is it jazz? Folk? Electronica? The correct answer is all of the above. If Soft Machine had come from Brazil and were just starting today, I imagine this is what they might sound like. The same spirit of relentless experimentation and a willingness to blur the lines between jazz and experimental rock run though the "grooves" of these eight tracks. Originally a collaboration between American horn player Rob Mazurek and Brazilian multi-instrumentalist Mauricio Takara, the ensemble has grown over the course of several releases to also include Guilherme Granado and Richard Ribeiro. The Brazilians provide "Tropicalisimo" jazz and folk influences, seen on the cavaqiunho-fueled "Carambola" or in the samba rhythms of "Pigeon." Mazurek's cornet bursts invoke the spirit of Hugh Masakela or Sun Ra, recalling the heady and experimental days of1960s jazz. This is especially apparent when juxtaposed against the folkier Brazilian touches, like the heavy percussion in songs "Jagoda's Dream" and "Just Lovin'." I would have enjoyed some songs more without so much electronic filtering and studio processing that in some cases did little to enhance the inherent beauty and strength of the performances. This is perhaps best exemplified by "Rio Negro" where it sounds like the horn tracks were dragged behind a truck for a few miles and then run over. But this album is all about hanging out over the edge, while both feet are still firmly planted in well-established traditions. More often than not the results are a success.