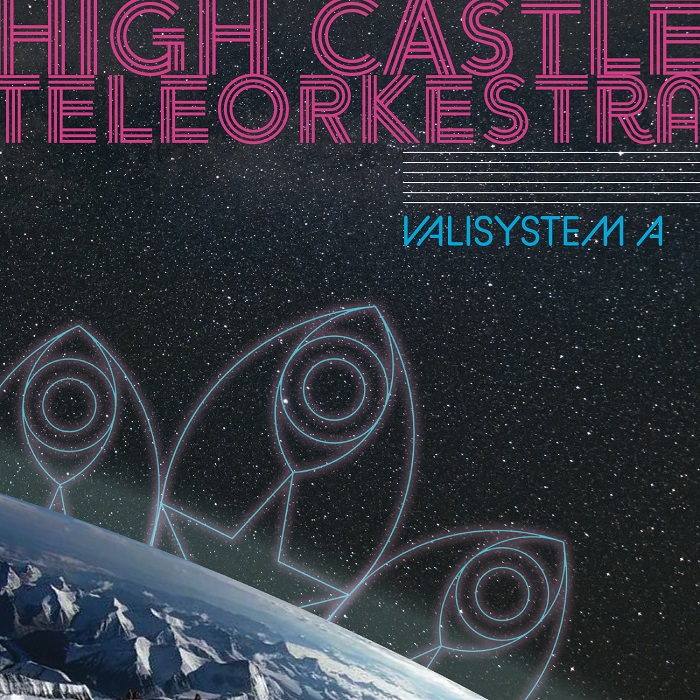 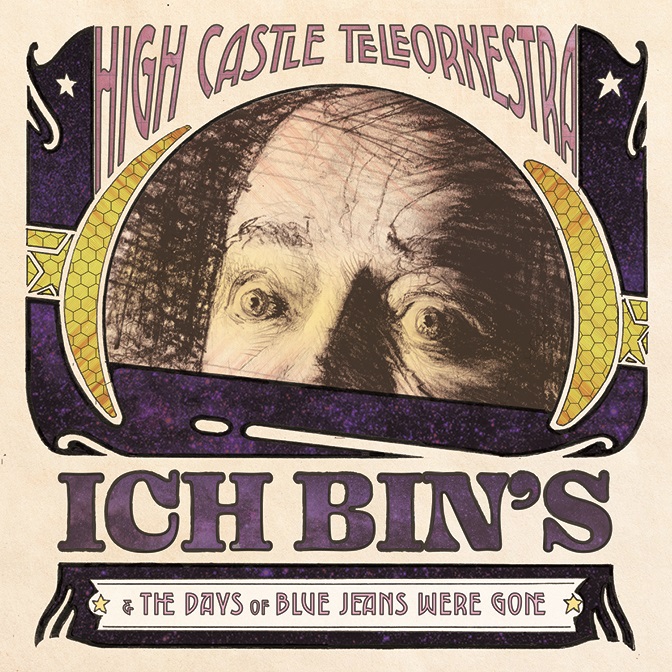 High-Castle Teleorkestra is a new project self-described as a remote music ensemble led by Tim Smolens (ex-Estradasphere, Don Salsa, and others, currently living in Denver Colorado), playing bass, cello, keyboards, composition, arrangements, production, and Chris Bogen (Doc Booger, living in New Orleans) playing guitar, analog synths, compositions, and co-producing. Add to that core four more members: Bär McKinnon (from Mr. Bungle and Umlaut, playing tenor sax, flute, clarinet, keyboards and compositions, living in Melbourne, Australia), Stian Carstensen (from Farmers Market; accordion, composer, and much more, from Norway), Dave Murray (from Estradasphere and Traun; drums, percussion and composition, from Southern California) and Timba Harris (from Estradasphere, Secret Chiefs 3, Probosci, and more; violin, viola, trumpet and compositions, now living in France). In addition, there are numerous guests playing just about everything that the six regular members don’t (bassoon, vibraphone, French horn, and more). A remote music ensemble indeed. And like Estradasphere, from which three of the members came, their music is all over the musical map; one can expect just about anything from these guys. Fearing that they would not have a full album ready in short order — understandable with members scattered all over the globe — they have decided to release two singles to hold potential fans over until the full package can be delivered, and that’s what is being reviewed here. “Valisystem A” is an interesting melodic piece with solid rhythmic elements and vague psychedelic overtones and vocals wonderfully reminiscent of Yes, all of which puts the song solidly in prog territory. Its flipside is “Klawpeels: Mission Checkup,” an instrumental piece featuring a great steel guitar line and sax soloing, something that is vaguely reminiscent of Santo & Johnny’s “Sleepwalk” with a bit more grit due to the presence of sax, a track that certainly deserves an A-side status as much as its flip. “Ich Bin’s,” the earlier single chronologically, translates to “I’m Not,” and with its strong and beautiful folk melody carried by accordion, alternating with rock outbursts imbues this instrumental tune with a distinct European flavor. Its flipside, another instrumental, “The Days of Blue Jeans Were Gone,” has the definite feel of a soundtrack piece, with some great accordion soloing and a beautiful breezy main theme, with just a touch of surf-rock here and there. While both of these singles have been released both digitally and as seven-inch vinyl, the downloads will feature an abundance of alternate mixes (stuff like “warped cassette mix,” “midi demo,” “solo accordion,” “instrumental alt mix,” “cruddy cassette mix” — you get the picture). My suggestion for downloaders is to first delete everything except the official mix of the four songs, listen to them incessantly — at least a dozen times each — then introduce yourself to all of these alternate mixes. Meanwhile, I’ll look forward to the full length album that should be out by the end of 2021. With six composers in the lineup, one can’t be sure that these four tunes will be included, so best hear them now.